Chelsie Lee, co-founder and CEO of Shipsi, shares tough lessons learned on her path to success.

Chelsie Lee co-founded Shipsi, which works with any retailer to provide same-day delivery natively on their website. They have a network of over 1.2 million drivers through partnerships with groups like DoorDash and PostMates in 850 cities. “We make it a safe playing field for retail and delivery networks,” Chelsie says, meaning they give businesses of all sizes access to the same delivery resources. Since ecommerce has sped up by about 20 years due to the pandemic, this service fills a critical gap. Their average delivery time is less than an hour! A first-time CEO, Chelsie has surmounted many challenges along her trajectory to success. She shared some of the biggest ones in her talk with Freddie Laker.

What are the biggest lessons she’s learned?

Here are the most important takeaways Chelsie has learned in her journey to success:

She’s a firm believer in following her gut, but that took time to learn. “In the beginning, at early stages of fundraising, every investor would say something different,” she recalls. One would tell her to go after the big dogs; the other would want her to focus on the small shops. “I found myself running in circles, and neither one felt right with my gut at the time.” Even though you’re naive to a lot of things as a new entrepreneur, you have to lay out your own course of action and stick to it, she emphasizes.

Chelsie also wishes she’d understood the full value of her time early on. Understand the “why” behind everything you do, she urges. Determine the value driver behind every meeting and other engagement. She once spent 80 hours being dragged through the mud by a group of 100 angel investors, not one of whom wrote a check. When four investors who had previously turned her down approached her about getting involved, she asked what had changed so she could suss out whether the meetings would prove worthwhile.

Finally, if you’re carrying negative energy around, find a way to shift it in another direction, she advises. It’s not going to serve you as a leader. She is constantly striving to cultivate more patience and empathy for those who aren’t as self-motivated as she is, she says.

Thus, she strives to handle interpersonal situations graciously. One angel investor who had thought their average order value wasn’t high enough called her to apologize and mentioned that he had to get candles for his grandson’s birthday party. Chelsie told him to place an order on their website, then grabbed an old box of birthday candles. “I tied a fancy ribbon around them, gave them to a driver that showed up at my house, and he got them 18 minutes later,” she said. While they didn’t have room for another investor, he told the story to a friend who got involved two years later!

How does she handle gender-based discrimination?

Chelsie has always had a confident streak that’s allowed her to show what she’s fully capable of, even when others have questioned her abilities. At 14, when some of her guy friends were making $500 in a weekend pumping gas in a marina, she insisted the owner hire her to pump gas, too. He told her, “Go put on a skirt and fill out an application, and you can work in the shop,” but she told him, “Jerry, I will be here at 6 a.m. on Saturday, and I guarantee that I will make more money than any of those boys will. If I don’t, you will never see me again. If I do, I have a job for the rest of the summer.” She, of course, had herself a new job, and she would school the boys in how to park boats, too!

How do you find the right balance of hype with a startup?

Bragging about every new development isn’t always the best strategy, says Chelsie. She used to send mass updates to potential investors, but she didn’t get any value from it. When she stopped, they got more hungry for news, she says. Letting them hear from current investors that she was up 20% to 200% week over week proved much more effective.

Regarding media exposure, she also questions whether an opportunity will give them brand recognition in the retail space, bring in a customer or a partner, or deliver some other value. 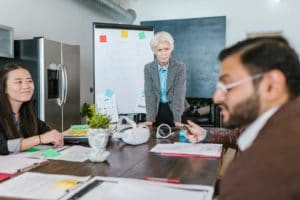 What is she not good at?

Overbooking herself is one of her weaknesses, Chelsie says. Case in point: Just after closing their first round of financing, they held their first investor portfolio celebration in San Francisco. She’d also signed up for a retail innovation summit that a large consulting firm would pay her more than she’d earned in the past three months to attend. “It was a big opportunity to go speak in front of a bunch of retailers, but the only way I could make it was to take a red-eye from San Francisco to DC,” she says.

After landing, she showered at the airport gym and stashed her day bag in one of the gym lockers—leaving the airport without realizing that’s actually illegal. Just as she was going on stage, she got a call telling her to claim her lost item.

Once back at the airport, she was directed from one lost and found to another. Finally, she told the security woman that she had left her bag in the gym locker—only to be told, “We don’t have a gym.” Flabbergasted, she realized that, exhausted, she’d gone to the wrong airport! She took a cab to the right one and finally recovered her bag. The experience taught her that sometimes you need to take a moment and breathe, and to give your schedule some breathing room.

What advice does she have on working with investors?

Convincing investors is tricky before you’ve started bringing in revenue, Chelsie says. Having a 20% growth target month over month in terms of transactions or customers is pretty realistic when you’re starting out, she says. However, the metrics they want to see keep getting higher as you progress.

Investors’ preferences are wildly unpredictable, so find out what makes them tick, Chelsie advises. She wishes she would have honed in on this early on in fundraising. Say to them, “Tell me about a recent investment you made or your favorite investment and why.” Then, ask when they made their last investment and what their youngest investment is.

This goes back to valuing your time. “Every second that I spend with an investor is a second that I take away from the business,” she asserts. As the founder, she doesn’t have the luxury of spending a lot of time with someone who’s very unlikely to bite because there are other people who will!